Prior to the purchase of the land that would become the famed historical site, Detroit Memorial Park, Blacks in the City of Detroit suffered embarrassment and indignities by White owned cemeteries.  Such atrocities included, but were not limited to, burials on certain designated days and inconvenient times so as not to disturb other White families during their burial or visiting times, having to enter through rear or side maintenance entrances, excessive fees, gravesite desecrations, etc.

Although most Blacks lived in the City of Detroit, adequate housing, health care, jobs and wages were scarce.  The disenfranchised and disgruntled Black community sought to remedy these indignities by uniting and providing for their own.  The purchase of the first eight-five acres of land in the Township of Warren was done so out of necessity, since the all African-American corporation could not purchase land in the City of Detroit. In 1925 led by the ideas and frustration of prominent businessman and funeral director, Charles C. Diggs, Sr. and drug store owner Aaron C. Toodle mobilized black leadership and raised capital to incorporate, purchase land and then operate as Michigan’s first Black-owned cemetery. 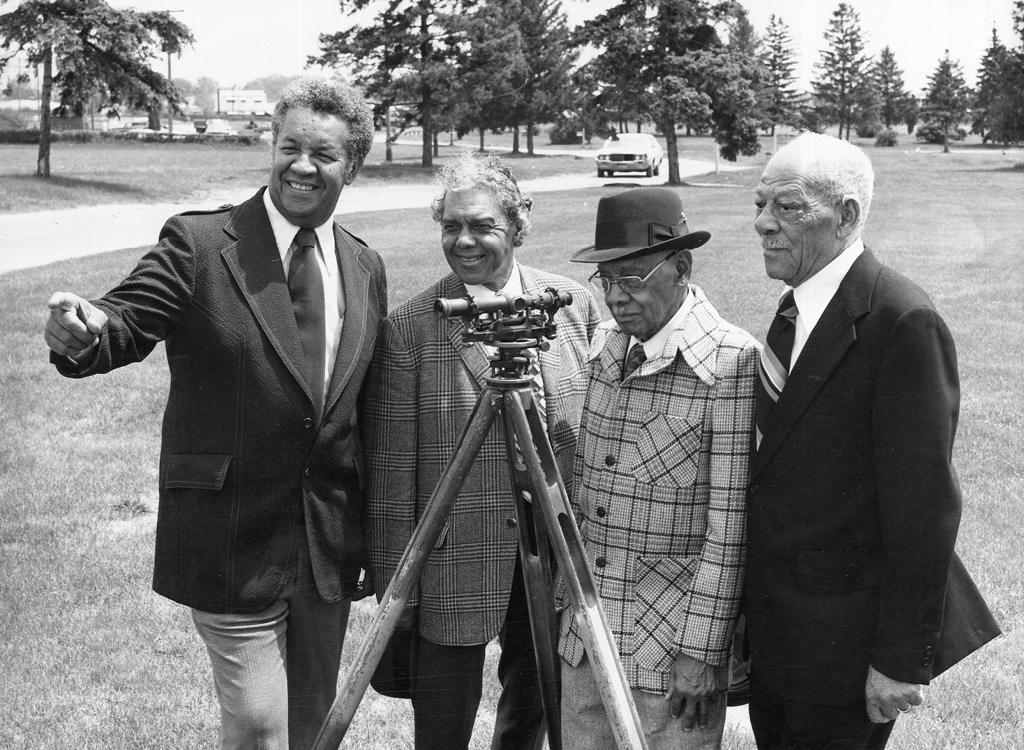 Soon after the land was sold to the Black investors and much into the hard work, cost and renovation to clear the land of trees, the Warren Township community began to reconsider and pressed members to give up the land.  In order to prevent a legally successful reacquisition, the board agreed that an immediate burial had to be made on the property to secure their purchase.

Covertly, during the night of October 30, 1926, two morticians (Charles C. Diggs, Sr. and Vollington A. Bristol) “unceremoniously buried a stillborn baby, Emma L. Brown, on the grounds; thus making it officially a cemetery and more difficult for the township to reclaim the land.” 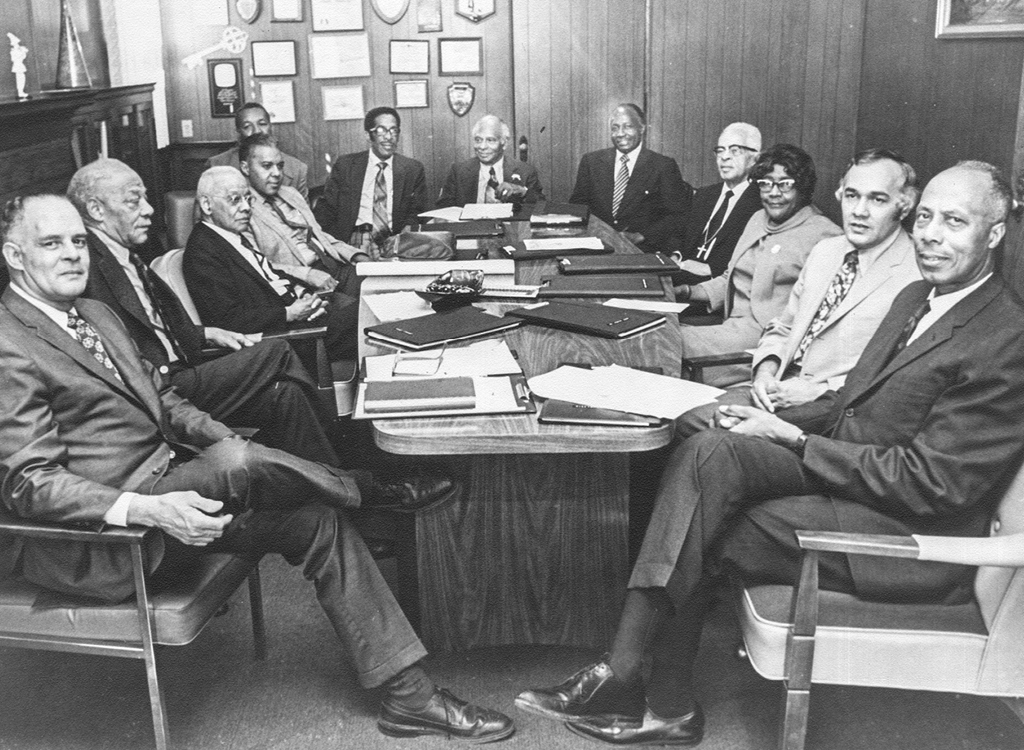 An African American Corporation Is Born

Initial investors were the who’s who of black leadership in Detroit; from businessmen, clergy, doctors, accountants, engineers, etc.  The group of 25 initial investors were assembled by Charles C. Diggs, Sr. and Aaron C. Toodle and encouraged to purchase 5 shares of stock each, for seed money to purchase land for a place where, regardless of race or  religion, a loved one could be buried or interred with dignity and full satisfaction.  In 1925, banks would not lend money to Blacks and holding title to land was nearly impossible inside the city limits.

Self funded and supported by much of the Black community, thus began a project of large scale proportion.  After the purchase of the land, the insurmountable tasks of clearing the trees and other debris and preparing the land, roads and drainage for burials, more funding and labor was required.  The first Board of Directors began aggressively advertising & selling family plots on a pre-need basis to raise capital while many in the community volunteered both their time and skill to finish the vision.

Such notable people included a Superintendent whose family agreed to live on the property’s farmhouse.  The living room as used as the first front office.  An engineer, Cornelius L. Henderson was commissioned to design and plan plots for burial, roads, and then fencing boundaries after surveying the land.   Clearing the dirt itself became difficult and businessman provided a horse drawn wagon to remove the large mounds of dirt to clear the land and flatten the grounds to ensure serene beauty and prestige of the first black owned cemetery and African-American Corporation.  During this time, it was not just Blacks who were disenfranchised, many Poles and Italian, newly immigrated and not speaking English, suffered many indignities as well.  As a result, the Detroit Memorial Park Corporation’s first Board Members thought it pertinent to adopt a policy that all burials of all race, creed and religion of the people be buried with dignity and respect. 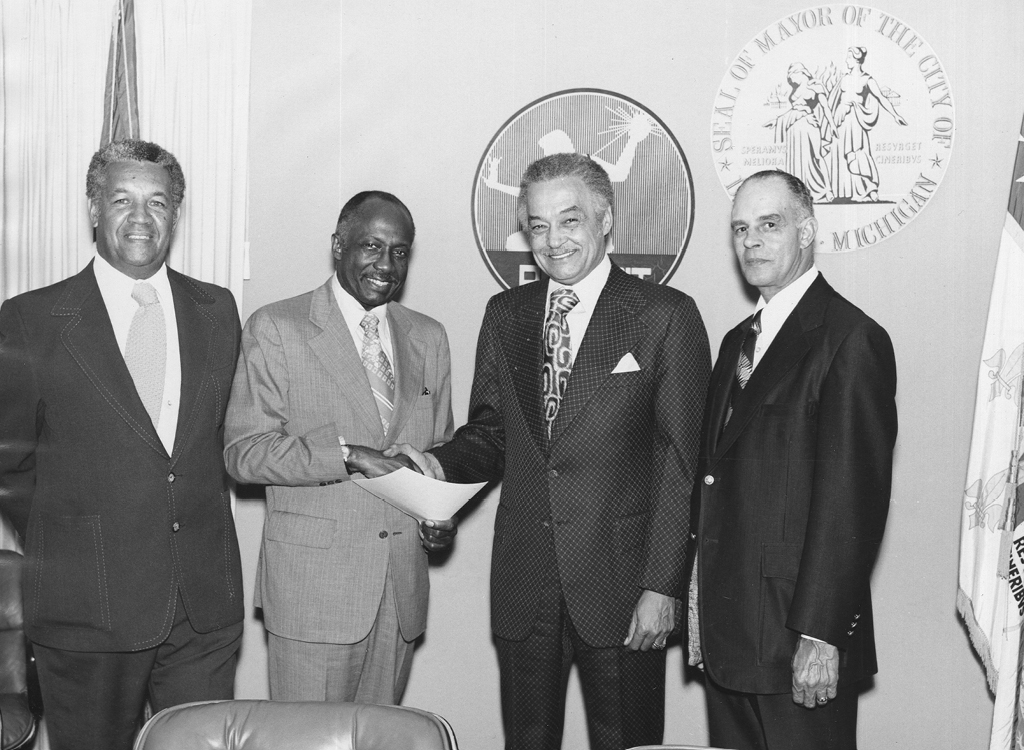 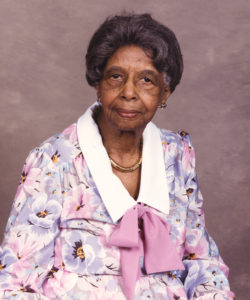 As a result of the Depression era of 1930’s the Black community suffered further such  loss of their savings in the bank, lack of food, transportation and other vital resources.  During this period, the Board Members of Detroit Memorial Park stepped up to  value their original creed of taking care of the needs and services of the disenfranchised black community, by starting a vegetable garden in the unused portion of the park.  This vegetable garden was maintained by and free to the community when food was scarce.  There was only one problem remaining…transportation.  The majority of black citizens resided in the city of Detroit, in or near the public housing building “Brewster’s Place” while Detroit Memorial Park was located just outside the city in Warren.  Most black citizen’s did not own private transportation, and there was no public transportation via this route.  The Board members sought a solution by contracting with a bus company to provide low cost rides on Sundays from Brewster’s Place to the park.  Not only were the free vegetables provided, but the longest running employee of the park, Mrs. Minnie Andrews Campbell would greet the citizens exiting the bus and warm their hearts with freshly baked goods and other foods.  This was more than a memorial park, it was a family community. 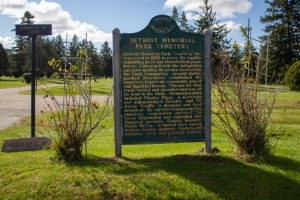 On Memorial Day, May 31,1976, the Detroit Memorial Park was designated an official historic site. An historic marker was installed on the cemetery ground.

Among those interred at this historic burial ground is Elijah McCoy. Born in Canada, McCoy studied in Scotland and moved to Ypsilanti, Michigan, after the Civil War.

Interested in science, McCoy acquired some fifty-seven patents for his inventions, devices primarily connected with the automatic fabricator he designed for moving machinery.

One of McCoy’s most important and valuable efforts was the “drip cup”, a small container filled with oil that flowed to the moving parts of heavy-duty machinery. This device for perfecting overall lubrication systems continues to be used in large industry today. McCoy was buried in the Detroit Memorial Park in 1929.

A detailed history about the DMP is written in the following publication: Detroit Memorial Park Cemetery: the evolution of an African American corporation,  by Dr. Roberta Hughes Wright ; foreword by Richard H. Austin.